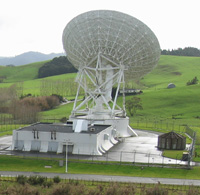 The Telecom and AUT partnership was further extended with the handover of Telecom's Warkworth 2 antenna in November 2010 for use as a radio telescope.

The Warkworth 2 antenna was designed and built by NEC and commissioned in July 1984. It was built as a wheel on track construction with 30.48m reflector and a Beam Waveguide feed. The dish itself is actually 30.48 metres and is 37 metres high. Warkworth 2, until decommissioned, was used for satellite communications, covering everything from phone calls, to internet traffic to TV content.

Over its band of operation Warkworth 2 is approximately six times more powerful than AUT's 12m antenna which means it can provide sharper resolution and the ability to investigate more distant objects. 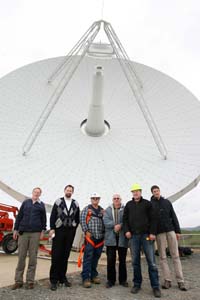 AUT’s 12m radio telescope is installed near Warkworth, 70 km north of Auckland - just 200m from the 30m radio telescope. It is a fully steerable fast slewing antenna of Cassegrain design. The radio telescope is equipped with a dual-polarization (LCP/RCP) L-band feed system and with a dual-band (S/X) dual-polarization feed system designed for astrophysical and geodetic research. With a hydrogen Maser clock and 1 Gb/s fibre optic data link AUT's Warkworth Radio Astronomical Observatory contributes to international VLBI and eVLBI research and service. The launch of the Radio Astronomical Observatory and the corresponding educational program at AUT (Astronomy Major at the School of Computer and Mathematical Sciences) are important steps for New Zealand towards its participation in the Square Kilometre Array project.