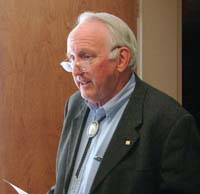 More than 60 years ago two events occurred in Australia and New Zealand that had a major impact on the evolution of radio astronomy in the post World War II era. In 1945 a group of Royal New Zealand Air Force personnel were stationed on the Australian island of Norfolk Island. In March 1945 the sun was detected with the 200 MHz radar aerial on Mount Bates. The follow up work on these Type I bursts was organised by Dr Elizabeth Alexander, head of the Operations Research Section of the Radio Development Laboratory, Wellington.

In 1948 John Bolton and Gordon Stanley came to New Zealand as leaders of The Cosmic Noise Expedition to New Zealand- 1948. They visited two sites, Pakiri Hill, near Leigh and Piha. The first identifications of radio sources with a galactic object and external galaxies resulted from these observations at 100 MHz using a sea-cliff interferometer brought from Sydney. At Pakiri Hill the astronomers were hosted by the Greenwood family.

To celebrate these events and the impact they had on the evolution of radio astronomy, a three day conference has been organised:New Zealand and the Beginnings of Radio Astronomy - A Process of Discovery.

Some speakers will elaborate on the process of discovery by discussing the history of astronomical and ionospheric research in NZ in the post war era. Others will highlight several important astronomical discoveries made 50 years ago and the impact these have had for our understanding of the universe. We are very fortunate to have Dame Jocelyn Bell Burnell (Oxford) attend and describe the exciting story of the discovery of pulsars.

At the conference we will have the opportunity to meet members of the Stanley and Greenwood families. In addition, Mary Harris, daughter of Elizabeth Alexander, will be a conference speaker.  On 1 February 2013, a plaque will be unveiled in Leigh to commemorate the discoveries of 1948.