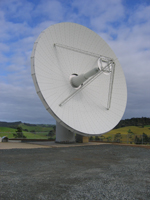 Years of planning, weeks of shipping, months of on site installation work all synchronised perfectly on Wednesday 8 October when AUT celebrated the launch of New Zealand’s first modern radio telescope.  The 12m dish, sitting on an 8 tonne pedestal, was built by Michigan’s Patriot Antenna Systems and then shipped across the Pacific before being assembled at the Warkworth Satellite Station, north of Auckland.

About 70 guests, including government and local body representatives, business leaders, distinguished astronomers and university colleagues were treated to an executive bus ride from AUT to the Warkworth site for the official ribbon cutting ceremony.  AUT’s Vice-Chancellor, Derek McCormack and Mayor of Rodney District, Penny Webster officiated.  The occasion was also used to promote the new Astronomy major being offered with the Bachelor of Mathematical Sciences beginning in 2009.