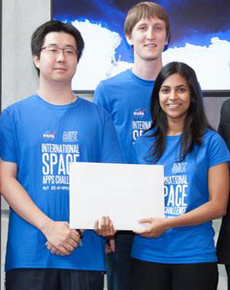 An AUT University computer science team has won New Zealand’s first ever NASA Space Apps Challenge with a mobile phone application that allows users to share their sightings of the International Space Station.

The application allows users to track the position of the International Space Station (ISS) on their mobile phone.  They can find out when the ISS will be up in the sky near them, where it will rise, how long the pass will last and what will be its highest elevation.  Users can then share images of the ISS via Twitter and other social networks.

The students in the winning team were: Boris Féron, Eleanor Da Fonseca, Harrison Black and Weixiong Cen.  They were mentored by AUT lecturers including Andrew Ensor and Sergei Gulyaev.

“We wanted to give both adults and kids the experience of seeing the ISS in the sky and sharing their knowledge and excitement with friends around the world,” said the team.

During the Challenge the team used online NASA feeds to collaborate with a number of other teams around the world; their strong collaboration drew praise from the judges.

The runners up were a team of nine product design students who used 3D printing to design a replacement wheel for the Mars Rover, which could be printed out in Space using a 3D printer.

Both winning teams will present their solution digitally to NASA’s international judging panel in May (see Youtube clips below).

Read US Ambassador David Huebner's blog about the Challenge.

Find out more about the NASA International Space Apps Challenge.