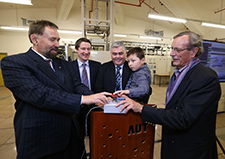 The ‘First Light’ ceremony was a proud moment for AUT and especially for engineers and scientists of the Institute for Radio Astronomy and Space Research (IRASR) who have been involved in the conversion of Telecom’s former Earth Station.  Up until 2010 the 30-m dish was used for satellite communications.

A crowd of around 60 watched with anticipation as the new telescope formally saw first light – the first observation made from a newly commissioned telescope.

The formal ceremony included short speeches from AUT Vice Chancellor Derek McCormack, Mark Mitchell MP for Rodney, Councillor George Wood, Dr Lewis Ball Director, CSIRO Astronomy and Space Science, David Havercroft Chief Operating Officer, Telecom NZ and Prof Sergei Gulyaev.  The push of a big ‘red button’ was the start of a demonstration of the capabilities of the dish.  It moved to position, tracked a suitable source and received radio waves from a star formation area.  In real time a computer screen showed a spectral line of the methanol maser from the interstellar matter.

The new radio telescope is the largest in New Zealand and one of the largest in the Southern Hemisphere.  It will be involved in collaborative research projects with our international partners and used to study active galactic nuclei and quasars, areas of star formation, the Centre of the Milky Way galaxy and the gaseous component of our Galaxy.

Prof Sergei Gulyaev said in his address, “This celebration is not just for the first light of one great radio telescope, but more importantly, celebrates the moment when New Zealand makes a great qualitative transition to become one of the leading radio astronomical countries.”

Dr Lewis Ball, the director of Australian CSIRO Astronomy and Space Science, said the telescope will boost New Zealand's role in linking with a global network of other radio telescopes. He also said, “It will enable scientists to better understand the Earth's tectonic plates, the formation of stars and the Milky Way's centre... it has a very significant impact in increasing the capability of that network of telescopes that we use to do fundamental astronomy."

The future looks bright as many exciting research collaborations are about to get underway.